Today we will be ignoring some terrible polishing errors as well as my usual rumplefingers. I swear they’ve been like that my entire life (though biting my nails for years certainly didn’t help), and it doesn’t matter how much I moisturize my hands. I will be scary as hell when I get older.

Eventually I had to actually bring some bolder colors back into my life, right? (Aqua isn’t bold? Hm.) Today I wanted some sparkle to counteract the relentless rain and cloudiness that this “spring” has been drenched in. The rest of the country is having heatstroke, and I’m still wearing out my winter coat. Thus, I pulled out MAC Bad Fairy for a quick hit of glitz. It’s not the only dense glitter in my collection, but it is one of the brightest I’ve currently got.

However, wearing it as a full mani seemed like a little too much for me, especially since it involved the pain of glitter removal in the not-too-distant future. So I paired it with Cult Nails Cruisin’ Nude. Might seem a little strange, but Cruisin’ Nude has an absolutely amazing pink shimmer running all through it that I felt balanced it out pretty well. Brilliant glittery red/pink/orange duochrome versus creamy tan with pink shimmer? I’m down with this. 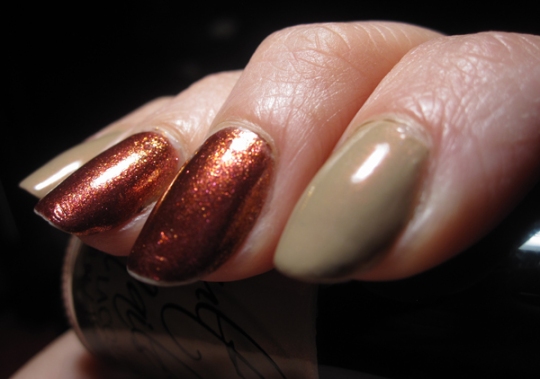 It’s a pretty fun manicure, though I will admit that I showered too soon after finishing it and managed to ding it up pretty fiercely. Plus, all photos are in relatively dim household lighting because it was aspiring to emulate the Great Flood out today. The rundown on this is: two coats of Cruisin’ Nude on each finger except the accents, which are one coat Cruisin’ Nude as a base, then three coats of Bad Fairy.

Sparrrkle. This is the first time I’ve really worn Cruisin’ Nude and I am seriously loving it. The contrasting shimmer sets it apart from the other neutral polishes I have. The formula was also stellar, and I could probably have used one coat, unlike Bad Fairy, which, along with being slightly bitchy to work with, is a pill to get fully opaque. Not to be harshing on MAC, really, since I’ve experienced the same thing with similar types of polishes from other brands. 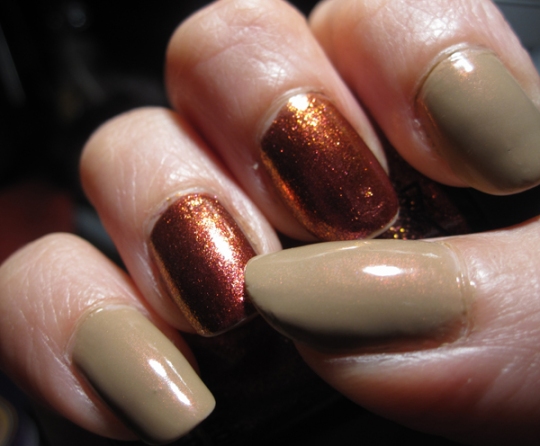 I should also mention that I am testing out base/topcoats again. I’ve tried a few, but I just got Butter London’s matte base and I am loving it. I’ll have to see how it responds to my Zoyas, as they’re the ones I’ve found to be the most picky so far. 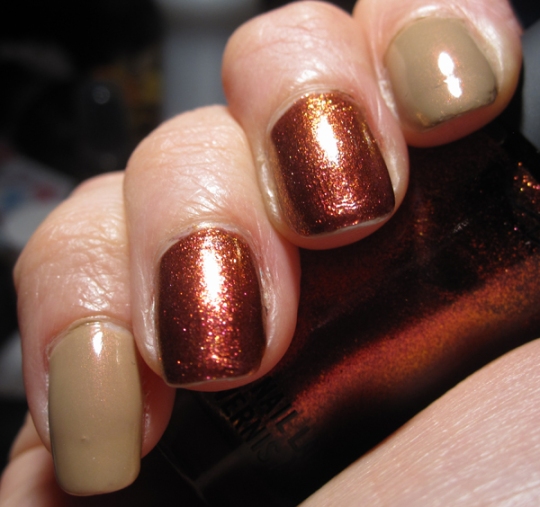 I bought Cruisin’ Nude directly from Cult Nails during a sale, and I regret nothing. It is beautiful, and hopefully it will stick around, so if I ever run low, I can buy a second one. Bad Fairy was an LE from a couple of years ago, and I got it on the secondary market. You might be able to locate it on eBay or the like.

All polishes were obtained through my own efforts to hand money to deserving people in exchange for beautiful things to plaster on my nails. Rather badly, in this case. Hromph.