First, I must mention that today was nail clipping day. I do this pretty regularly to keep my nails in good shape. They grow pretty quickly, so I usually cut them a bit shorter than I really want them, and they’re about perfect in a week or so. The images you’ve seen for the last week or whatever are my nails at about the longest I allow them to grow. Much longer than that and I start gouging myself.

TL;DR, my nails are pretty short today, thus I went for a dark color because I sometimes find them a little overwhelming on long nails.

This one is a NotD featuring ORLY Royal Velvet, a blue/violet duochrome; Nfu Oh 53, a translucent blue polish with orange-red-green shifting flakes, and my singular favorite, Essie Matte About You.

The post is titled the way it is because I find Royal Velvet to be annoying in application — thin, streaky, and difficult to control — to the point where I’m nearly tempted to buy Mysterious Curse, its clone from the ORLY Dark Shadows collection, as I’ve read that it’s thicker than Royal Velvet. 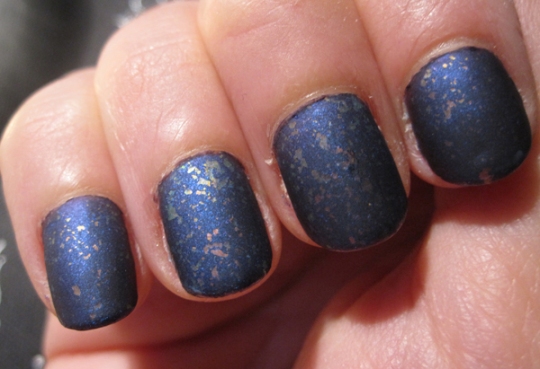 This was three coats of Royal Velvet with one fairly thin coat of the Nfu Oh on my left and two on my right (hence the differing amounts of flake — I did eventually match them, but I liked the way fewer looked and kind of wish I’d left them both with one. It also murdered the purple right out of it, as the Nfu Oh is blue-based. The extra flakes were pretty, though. ), and then a whopping slap of E-MAY. I am deeply in love with flakies under matte. The effect makes me very happy.

When not buried under matte, Royal Velvet tends to appear mostly blue, as the shimmer is intense and tends to overwhelm the base color in all but the most intense of light. After being matte’d, it seems to turn into a more proper duochrome, if you will, in that it shows both purple and blue in equal measure based more on the angle from which it is perceived. It’s still hard to photograph, though, and definitely shows up best in more diffuse or yellow light. The above photo was taken with my desk light off — see how much more purple it looks? That was way more visible in person, too.

I’m enjoying this mani, but I’m still feeling greenish, so I may go back to that after tomorrow. Still, isn’t this pretty despite my horrible application and smudging around the edges?

I buy my ORLY polishes mostly from Ulta, especially when they have specials. They are available other places online, too. The Nfu Oh was a gift, but I presume you can find them online. Essie came from Ulta.

Not all polishes in this post were bought by me, but none were given as promos. Just birthday presents. :)

Posted by Ahna in nail of the day Tags: blue, duochrome, essie, flakie, Nfu Oh, ORLY, purple, slap a matte on it