So I missed a day due to vacation and lazy! Yeep! I’ll have to do something extra next week. The mani I left with (Chanel Peridot) didn’t last four days, so I bought some cheap-but-surprisingly-decent polishes at H&M and Claire’s, so I should use those. One of them is a truly hilarious glitter that changes color in sunlight. Hopefully we’ll get some proper sun again so I can take some photos.

Today, however, I have a mani I did before I left — a-england Lady of the Lake and OPI DS Diamond with a bit of China Glaze Ink. It was my first attempt using scotch tape, and it went …acceptably well? 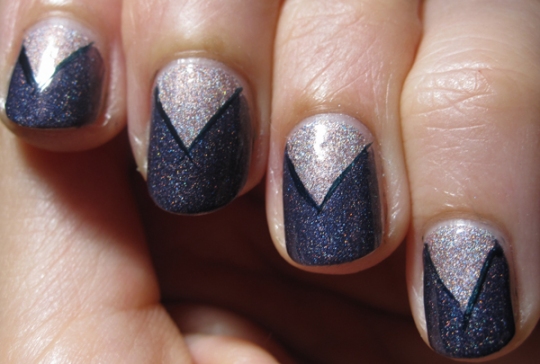 Both of these are scattered holos–Diamond is the lavender-pink, and Lady of the Lake is the violet. Ink is approximately the color of blue ink, and comes with a super-thin nail art brush.

I did this in a slightly silly way (as I said, it was my first attempt) — first, I painted a single layer of DS Diamond and let it dry, then I cut a triangular shape out of tape, slapped that on my nails, and painted Lady of the Lake around it.

Naturally, the edges came out a bit ragged, so I added psuedo-detailing with Ink. 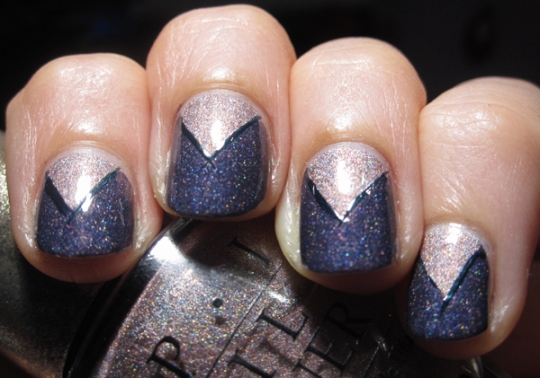 This actually looked a great deal nicer in person than it does in macro. I got several compliments on it, and really enjoyed wearing it.

I bought DS Diamond at a salon (just a random one I happened to stop in because they had a lot of older OPI on display), Lady of the Lake directly from a-england, and Ink was part of the mad stash liberation/redistribution by the Superlatively Coiffed and Always Well-Dressed U. ;)

Because around here, April is usually gray. Hmph. So here’s another matteified jelly sandwich for you, this time using another of the OPI NYC Ballet shades — My Pointe Exactly — and a pretty glitter topcoat called Cherry Blossom from an indie company, Amy’s Nail Boutique.

My Pointe Exactly is a very sheer gray polish. I like it enormously, although it doesn’t actually look that fantastic on me, as it’s a warmer gray and I tend to do better with cooler tones. I don’t generally care that much, but this one does end up making my nails look a little dirty if I leave it shiny. The inspiration for Cherry Blossom is pretty obvious, and you can see the components pretty clearly. I’m quite sure the square on my index finger snuck in accidentally, as there are no others visible in the bottle. Bonus?

Cherry Blossom has a slightly tinted base with some shimmer, which would, I think, make this lovely to wear over a brighter color. Blue would be the obvious choice in this case. The gray I picked is more representative of what it’s like in my part of the country during spring, though. We get the odd nice day, but often it’s overcast.

My Pointe had a fairly runny formula, and flooded my cuticles completely. Cleanup was not a bear, as it’s not heavily pigmented, but it was extensive. By contrast, Cherry Blossom was initially so thick that my first attempts resulted in horribly lumpy nails, so I added some thinner and that made it easier to work with. I liked the results well enough, but sometimes I just can’t be happy with shiny nails. :)

You’ll note that I have no photos of my other hand. This is because I borked one nail completely and didn’t have time to redo it before running out the door. :)

I bought this OPI at a Nordstrom’s Rack, but they are available at a wide variety of places. Amy’s Nail Boutique currently sells on Etsy.

This is not a raven.

Blue and bronze: book-version Ravenclaw colors. One might argue that OPI Warm & Fozzie is more like gold/copper, but isn’t that a pretty decent description of bronze? ;D I didn’t actually plan it to be a themed mani, though. I just thought these two colors would look nice together.

The blue is another Ulta mini from the Paint the Town set — Nauti-cal but Nice. It’s a very deep blue with a very subtle teal shimmer, so subtle that you cannot see it in the bottle, only in very direct light on the nail. This is two coats. There is a topcoat on it, a sweet purple/blue/green glimmering confection that I’m not entirely sure how to talk about, as it was a gift-with-purchase, and as far as I know, doesn’t have a name yet.

Warm & Fozzie is gorgeous, a flecky, dense glittery beast with a mild duochrome effect (copper to gold, with hints of green at extreme angles) in a smoky brown sheer base. This is two coats; the first was translucent and streaky, and the second was pretty much perfect. A third coat might have given me a little more depth, but my experiences with other polishes like this (MAC Bad Fairy, ORLY Space Cadet, etc.) made me a little leery of drying time.

Nauti-cal had a fairly lousy formula and  wore terribly. Even with a topcoat, I had minor tipwear after a couple of hours. You can see it on both hands. It’s a nice color, but I’m not sad that I only have a mini, and I probably won’t wear it that often, though I might seek out other colors in a similar family. I don’t have anything else quite like this — it’s darker than most of the other blues (Revlon Royal, ORLY Royal Navy) I have, and more decisively blue than some of the other dark bluish shades in my collection (Zoya Cynthia, Nails Inc. Kensington, both are much more teal and neither has shimmer). On the plus side, however, it did not stain, though I do always use a basecoat, so that may affect my results.

Ayup. It was fun to wear. The blue started chipping, but I’m betting Warm & Fozzie would have worn pretty well for another couple of days. I’m happy to have it in my collection, and will be wearing it again with glee, especially as we shift towards autumn.

The Ulta polish was bought at *gasp* Ulta, and the OPI was purchased via a blogsale. It’s discontinued, from the Muppets collection last year, but you can still find it for sale at various places around the web. The glittery topcoat on the blue is an unreleased promo from Lilacquer, but I imagine you’ll probably see it, or something similar to it, sometime in the next while. :) I know I’m looking forward to seeing what her next theme is! :D

Bonus image of a different mani under the cut — RBL Jane and my first attempt at a newspaper accent nail.
END_OF_DOCUMENT_TOKEN_TO_BE_REPLACED

Pastels make me happy sometimes. Okay, frequently. Especially when they remind me of ice cream, and not just any old ice cream, but spumoni. I could have made it more like spumoni by adding, perhaps, a light amount of pink glitter to the pink nails and including a milky brown nail for the chocolate, but pshaw. This was quite pretty enough on its own. 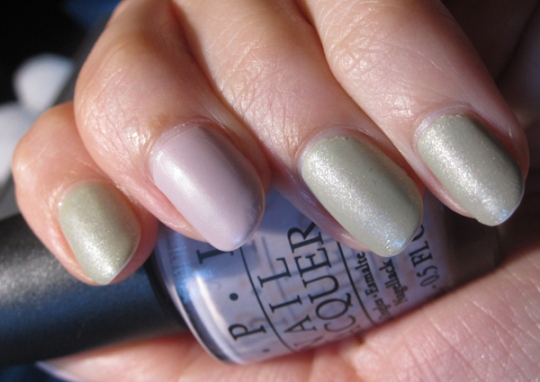 The two main polishes here are OPI Where’s My Bikini Top and First Names Only. These are from the current crop of Ulta exclusives, but are actually straight-up renames of, respectively, Stranger Tides and Steady As She Rose from the Pirates of the Caribbean collection last year. Where’s My…/Stranger Tides is a mildly pistachio-esque, pleasantly dusty pale green, and First Names/Steady As is the cool light pink; both are cremes, both had reasonably good coverage. I used two coats of each color over a Revlon basecoat, and, much to my dismay, these OPIs did not play well with it at all. Shrinkage started almost before they were dry, and they started chipping around the edges after less than a day. 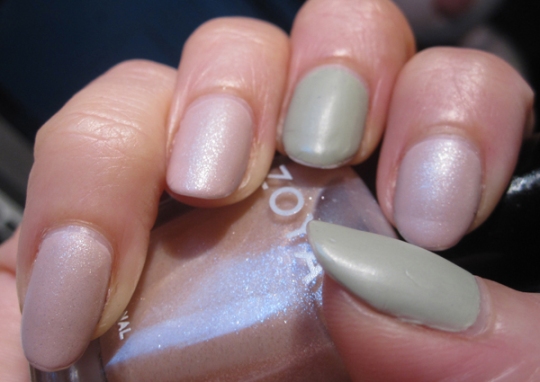 The sparkle topcoat is Zoya Glimmer. It’s a silver and gold shimmer in a slightly peachy translucent base. I’ve seen people use this for a full mani, but I think it’s really best used over other colors. It did alter the color of the base slightly, making it slightly more warm. Compare the nails on my left hand (green shimmer, pink matte accents), with my right (pink shimmer, green matte). I think it’s more noticeable on the pink; without Glimmer, it’s cooler and with it trends slightly more peachy. 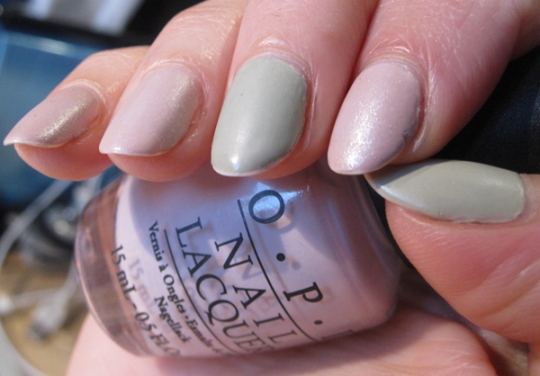 Pistachio and cherry ice cream. This is entirely what this reminded me of, soft and creamy and suddenly I want spaghetti. Check out the chipping action on the side of my index finger there. I cannot recommend the Revlon quick-dry basecoat with OPI, or at least, -these- OPI polishes. It has worked reasonably well with other brands, especially other drugstore brands, however.

Sparkly! Did I mention that I’ve had a full relapse into my matte-ifying ways? Well, I have. Oh, Matte About You, why are you so amazing? I have no good answer for this, but I certainly do love it.

Funny story — the ring finger on this hand actually had a different base coat because I dinged it badly enough that it needed repainting. Can you see how much less shrinkage there is on that finger? All the others just look slightly lumpy at the edges, but not that one.
The two OPI polishes I bought at Ulta, as you might expect, although I’ve seen the original releases with the Pirates names at the Nordstrom Rack recently. The Zoya was purchased from Zoya. 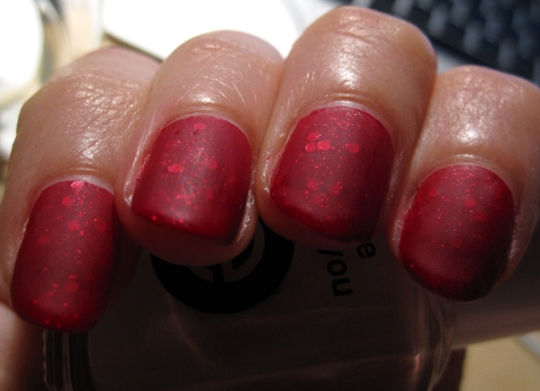 This is pretty color accurate, but mostly it photographed like this:

Another matte’d jelly sandwich! Woo! This one is Ulta Paint the Town, from the Paint the Town mini-set, with OPI Pirouette My Whistle. I wanted to use Pirouette, which is a lovely, reasonably subtle glitter topcoat, clear with tiny silver glitter and soft silver hexes (they almost appear white, they’re so satiny), but I didn’t want to pair it with a pastel or black. I wanted to do something BRIGHT. Hence, Paint the Town, which is a pretty gorgeous dark, almost blood-red jelly. 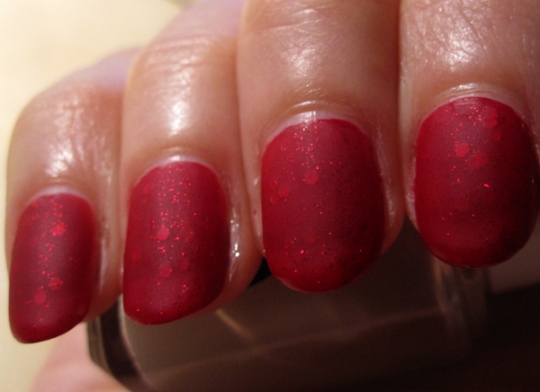 This mani involved a ridiculous amount of cleanup, as Paint the Town was really in love with flooding, and, given that it is a tiny bottle, not the easiest brush to manipulate. But it was worth it. In sunlight it was a bit hypnotic. 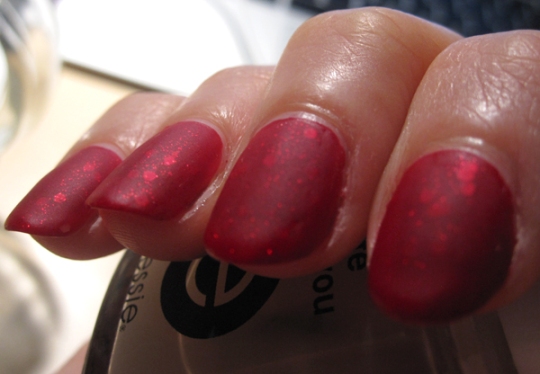 I am not hugely prone to wearing red polish, but this made it a lot of fun. I really enjoy these translucent manicures. I’m finding myself wanting a blue jelly that I can use to make ocean-inspired manicures with Pirouette. 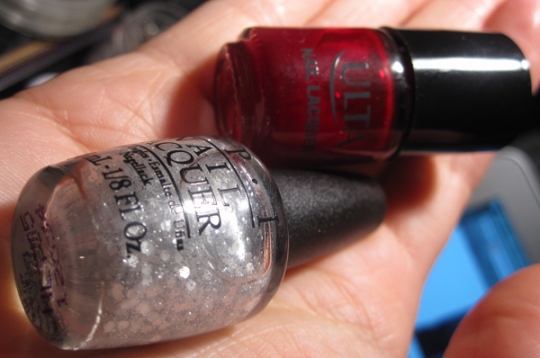 Bottle shot! Aren’t they cute? I think I’m going to need a bigger bottle of Pirouette My Whistle, though. As a person who is not a huge fan of glitter, finding one that I really like means that you’ll all get very bored with seeing it used in my sandwiches from now on. ;D

Ulta polishes purchased at Ulta. Pirouette My Whistle was part of the NYC Ballet Soft Shades mini-set that I’ve also seen at Ulta and other places where OPI is carried, but I got it in a blog sale.

Posted by Ahna in nail of the day Tags: glitter, jelly sandwich, opi, red, slap a matte on it, ulta