This is not a raven.

Blue and bronze: book-version Ravenclaw colors. One might argue that OPI Warm & Fozzie is more like gold/copper, but isn’t that a pretty decent description of bronze? ;D I didn’t actually plan it to be a themed mani, though. I just thought these two colors would look nice together.

The blue is another Ulta mini from the Paint the Town set — Nauti-cal but Nice. It’s a very deep blue with a very subtle teal shimmer, so subtle that you cannot see it in the bottle, only in very direct light on the nail. This is two coats. There is a topcoat on it, a sweet purple/blue/green glimmering confection that I’m not entirely sure how to talk about, as it was a gift-with-purchase, and as far as I know, doesn’t have a name yet.

Warm & Fozzie is gorgeous, a flecky, dense glittery beast with a mild duochrome effect (copper to gold, with hints of green at extreme angles) in a smoky brown sheer base. This is two coats; the first was translucent and streaky, and the second was pretty much perfect. A third coat might have given me a little more depth, but my experiences with other polishes like this (MAC Bad Fairy, ORLY Space Cadet, etc.) made me a little leery of drying time.

Nauti-cal had a fairly lousy formula and  wore terribly. Even with a topcoat, I had minor tipwear after a couple of hours. You can see it on both hands. It’s a nice color, but I’m not sad that I only have a mini, and I probably won’t wear it that often, though I might seek out other colors in a similar family. I don’t have anything else quite like this — it’s darker than most of the other blues (Revlon Royal, ORLY Royal Navy) I have, and more decisively blue than some of the other dark bluish shades in my collection (Zoya Cynthia, Nails Inc. Kensington, both are much more teal and neither has shimmer). On the plus side, however, it did not stain, though I do always use a basecoat, so that may affect my results.

Ayup. It was fun to wear. The blue started chipping, but I’m betting Warm & Fozzie would have worn pretty well for another couple of days. I’m happy to have it in my collection, and will be wearing it again with glee, especially as we shift towards autumn.

The Ulta polish was bought at *gasp* Ulta, and the OPI was purchased via a blogsale. It’s discontinued, from the Muppets collection last year, but you can still find it for sale at various places around the web. The glittery topcoat on the blue is an unreleased promo from Lilacquer, but I imagine you’ll probably see it, or something similar to it, sometime in the next while. :) I know I’m looking forward to seeing what her next theme is! :D

Bonus image of a different mani under the cut — RBL Jane and my first attempt at a newspaper accent nail. 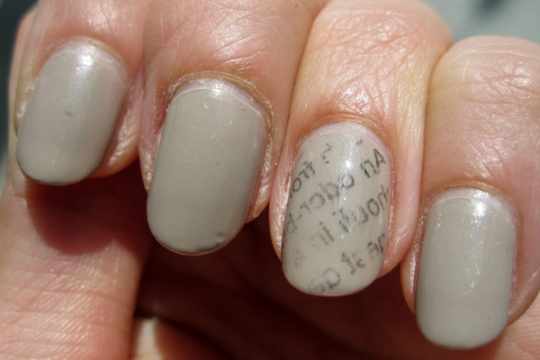 Just so. I took exactly one photo of this over the three days I wore it, so it’s just here as a reminder to myself that I did it. I have such arguments about Jane. It was thick and goopy and I eventually added a considerable amount of thinner, which helped but…gah. It still has a terrible drying time and, even though it’s beautiful and I love it, it takes me a lot of effort to make it look good. It is, however, almost the perfect color for newspaper nails. I didn’t have a newspaper handy, so that was actually a bit of Lush Times.

Also, my hands were super-dry just there. Ick.