I apologize for a bit of brevity for the next little while. My cat is sick and we’re having to take her to various specialists. I’ve got a few posts in the queue, so there will still be updates, but I’m a bit distracted.

I am trying my hardest to avoid using my matte. Really, I am. But I desperately wanted to for this manicure, as Glitrix’ polishes look so darn pretty matte. I resisted, and here we are. Look! Shiny! (do not look at my raggy cuticles. the force compels youuuu) 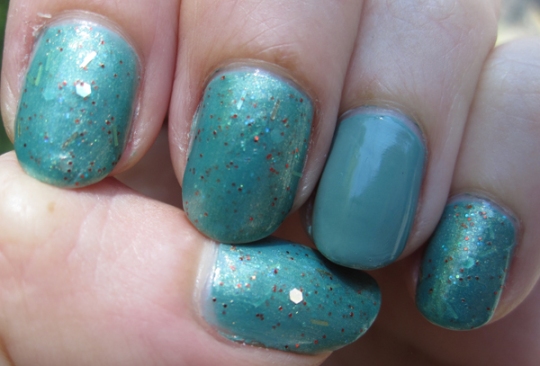 Zoya Bevin was the base polish for this. Zoya’s site description is: “dusty, medium sage green with teal tones and a creamy opaque finish”. I generally agree. It’s less aqua than, say, Wednesday, which one of my friends was wearing recently and I crushed hard on until I reminded myself that the spoon swatch that I have of it is practically identical to Julep Miranda. 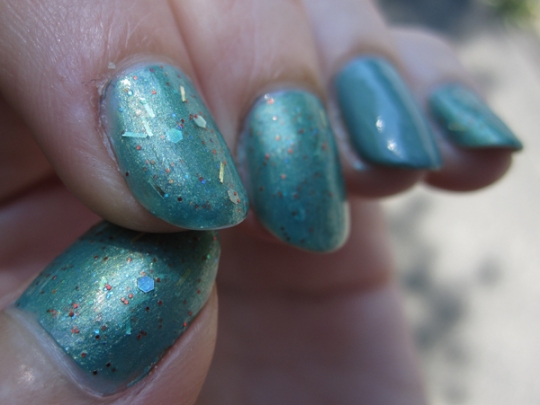 Sous La Mer is from Glitrix, and it’s a very pretty aqua polish with a bunch of glitter: large holo hexes, gold bars, tiny red hexes, plus some added gold shimmer. It’s neat, though the gold doesn’t show up as well on the nail. I’m betting it would stand out more if it were matteified, though. Just saying. ;) The big hexes are a little tougher to dig out of the bottle, but as you can see, I managed a pretty decent distribution, though some of them got buried by the second coat. It’s actually a pretty opaque polish. 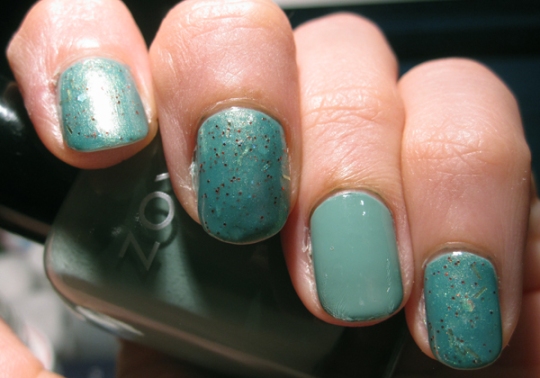 This is the only indoor photo (the rest were taken at a bus stop. :3 Many of my photos are). I should have taken a bottle photo, but if you kind of take the one of Sakura from a few days ago and turn it aqua-green instead of pink, you pretty much get the idea. Seriously adorable little star-shaped bottles. She actually sells empties, too, if you’re interested in getting some for making your own tiny frankens. 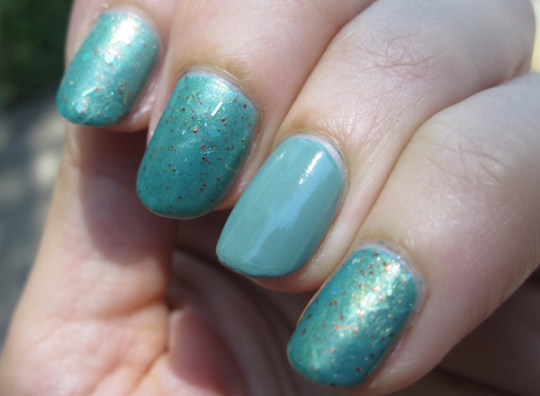 One coat of Bevin on everything, another Bevin on the accent nail, and two of Sous La Mer on everything else. I really enjoyed wearing this, though I am considering getting a bottle of Seche or possibly Gelous to accommodate for the slight bumpiness of the glitter. It’s not really distracting, and actually shows up more in photos than it does to the touch, but I’m thinking about it.